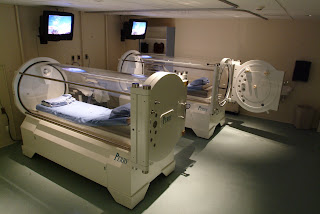 Hyperbaric oxygen therapy (HBO) has been available in our community since April, 2003.  Our chambers are located within the CENTRA Center for Wound Care and Hyperbaric Medicine on the second floor of Virginia Baptist Hospital.  Our Center is fully accredited by the Undersea and Hyperbaric Medical Society’s Facility Accreditation Program.  We are one of six accredited programs in the Commonwealth of Virginia and the only one west of Richmond.  This therapy has been successfully utilized for a variety of conditions including diabetic foot and lower extremity ulcers, problem healing in irradiated fields and osteomyelitis (as well as other less frequent indications).  So what is the role of HBO in patients with peripheral arterial disease?

What is Hyperbaric oxygen therapy and how does it work?
HBO is the breathing of pure oxygen at increased atmospheric pressure.  We utilize “monoplace” chambers, in which the entire patient is sealed in an acrylic tube (or “chamber”).  We replace the ambient air within the chamber with 100% oxygen and increase the pressure to 2.0 – 2.4 atmospheres.  In comparison, this pressure would be about the same as a scuba dive to about 50 feet of water.  In this environment, hemoglobin molecules are saturated with oxygen and even more oxygen is dissolved into the plasma of the blood.  This allows the delivery of super-oxygenated blood (about 15 times the amount of oxygen delivered to the tissues if the patient were breathing room air at 1 atmosphere of pressure) to the capillary beds.  This has many beneficial effects on wound healing.  These include improved fibroblast function and collagen deposition, more efficient leukocyte function, an increase in the amounts of growth factors in the wound bed, and a synergistic bactericidal effect with some antibiotics.  Oxygen in concentrations achieved in the HBO chamber actually diffuses into bone and also has a bactericidal effect in patients with osteomyelitis.  The most important effect in our diabetic patients and in the patients with wounds in irradiated tissues is angiogenesis which is most likely mediated by stem cell recruitment from bone marrow.  A new capillary bed can be achieved in diabetics with small vessel disease and in patients with localized tissue ischemia from radiation therapy.

What role does HBO play in acute arterial ischemia?

A patient can develop acute arterial ischemia through trauma (crush injury or direct arterial trauma) or from emboli.  After the acute arterial injury or blockage is corrected a compartment syndrome can develop.  HBO can play a role in these patients post-revascularization by reducing edema and increasing the oxygenation of injured tissues.  Often fasciotomy can be avoided and tissue salvaged before frank necrosis can occur.  This usually involves a short course of hyperbaric therapy, sometimes on a twice daily schedule, until edema resolves and all tissue is viable.

What role does HBO play in peripheral arterial disease and tissue loss (ulcer)?

Patients often present to the Wound Care Center with lower extremity ulceration and non-palpable pulses.  If the rest of the history and physical exam indicates significant peripheral arterial disease, then non-invasive testing is ordered.  This may include a test we perform in the Center, a trans-cutaneous oxygen measurement (or “TCOM”) as well as the standard lower extremity arterial Doppler study (LEAS).  We would also consider performing a TCOM in a diabetic patient with palpable pulses to see if they have significant small vessel disease secondary to their diabetes.  If the patient has very low tissue oxygenation at the distal leg or foot level or critical limb ischemia is determined on LEAS study then revascularization (either surgical bypass or endovascular revascularization) would be needed before we would anticipate that these ulcers would heal.  Hyperbaric oxygen therapy is NOT going to be beneficial in the patient with critical limb ischemia which cannot be corrected.  Once a patient with an arterial ulcer has been successfully revascularized, then HBO would be indicated to help speed healing when there is also deep tissue involvement, osteomyelitis or persistent small vessel disease after the inflow has been corrected.
In summary, Hyperbaric Oxygen Therapy is a useful adjunctive treatment in patients with acute arterial ischemia, patients with arterial ulcer and deep tissue involvement after successful revascularization and in diabetic patients with good inflow but significant small vessel distal disease.
Referrals for wound care and consideration for hyperbaric oxygen therapy or trans-cutaneous oxygen testing can be obtained by calling our Center at 434-200-1800.